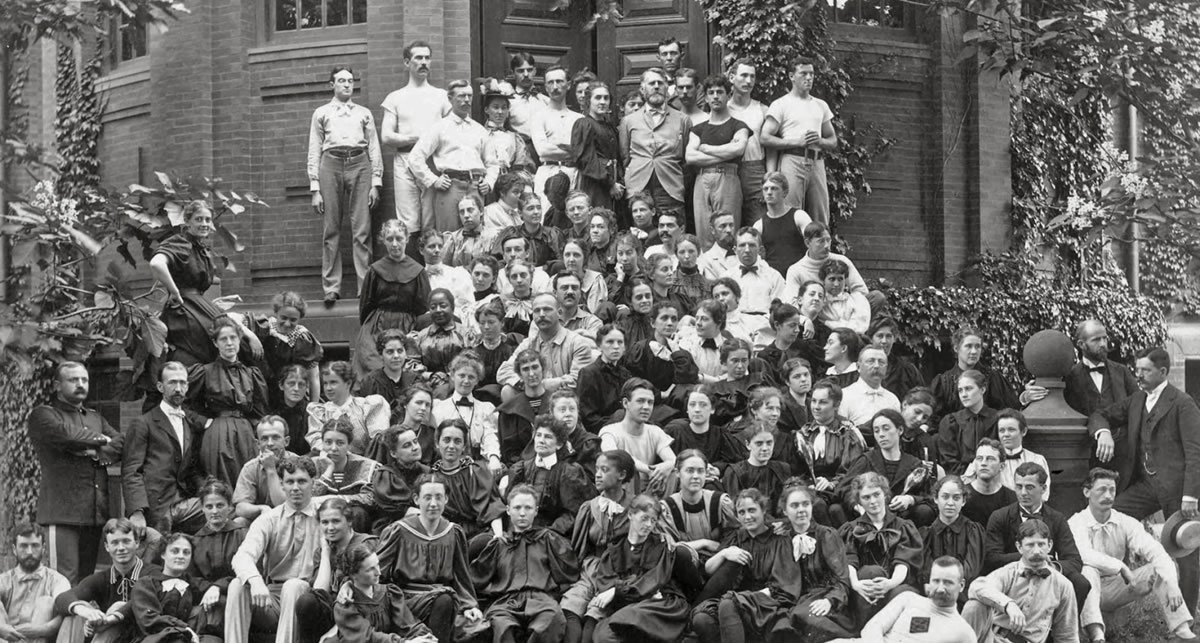 The Harvard Club of New York City was founded in 1865 by five Harvard graduates seeking to continue the fellowship of Cambridge. The Club had no permanent home for nearly 30 years. Rooms were rented in a variety of locations for meetings, the annual dinner was held at a restaurant, often Delmonico’s. 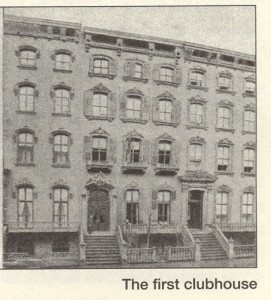 In 1890 with over 500 members, a Building Committee was formed to purchase land and build a permanent Clubhouse. Money was raised by subscription throughout 1891-92. Two adjacent lots were found on West 44th Street which was then lined with horse stables. Charles F. McKim (Harvard Class of 1867), of the renowned architectural firm, McKim, Mead & White, was chosen to design “Harvard House.” McKim was well known to the Committee, having recently completed the very popular Johnston Gate at the western entrance to Harvard Yard, the Boston Public Library and the country homes of many Club members. A Club member, McKim declined to accept any payment. Finances limited the size which was a modest 50 x 50 foot three-story building, on the front half of the lots 27 & 29 West 44th Street. McKim presented a red brick and limestone building in a Georgian style, reminiscent of the older buildings at Harvard. The new Clubhouse opened in June 1894, furnished entirely with donations from members. It comprised a small grill room, reception and offices on the first floor, a spacious library on the second, and two small card rooms and a billiard room on the third. Annual dinners were still held outside the Club. 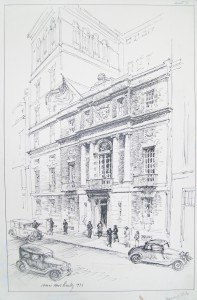 In 1905 the first addition was complete, also designed by McKim. This expanded the building through to 45th Street, including the Grill Room, two floors of bedrooms and three squash courts on top, and most impressively, Harvard Hall. Ninety feet long, thirty six feet wide and a full three stories in height, Harvard Hall is the Club’s outstanding architectural feature and considered one of McKim’s masterpieces. In 1915 the second addition, a seven story tower, opened to the west. McKim had died in 1909 but his firm, McKim Mead & White followed his designs, making a seamless addition. This added the Main Dining Room fronting on 45th Street, more banquet rooms, a bar, 20 more bedrooms, several squash courts on the sixth floor and a small swimming pool on the seventh, a novelty at the time.

In 1940 the “Ladies Entrance” was added just east of the main door allowing members’ spouses and Radcliffe alumni to use separate quarters in the Club which included a reception room, a lounge, and two dining areas. Women were admitted as full members in 1973 and the Ladies Entrance removed. In 1967, the Harvard Club was included in the first group of buildings designated New York City Landmarks. Many additions were considered though the time was not right until 2000 when an expansion plan was determined. In 2003, the latest addition was inaugurated. A contemporary design of glass and limestone by Max Bond (Harvard Class of 1955, March 1958), of the firm Davis Brody and Bond complements the McKim façade without imitating it. This added 40,000 square feet to the Club, which included a greatly expanded fitness center, eighteen more bedrooms, and seven banquet rooms.

In 2014, the Club completed construction of an outdoor space for its members. A major milestone for the Clubhouse, the Rooftop is the most significant capital project realized in over a decade. The Bar combines contemporary elements with classic finishes; The Terrace provides Club members “al fresco” dining to enjoy during the warmer months with views of the Chrysler Building and Times Square.

Explore the interactive timeline of the club’s key events in history.